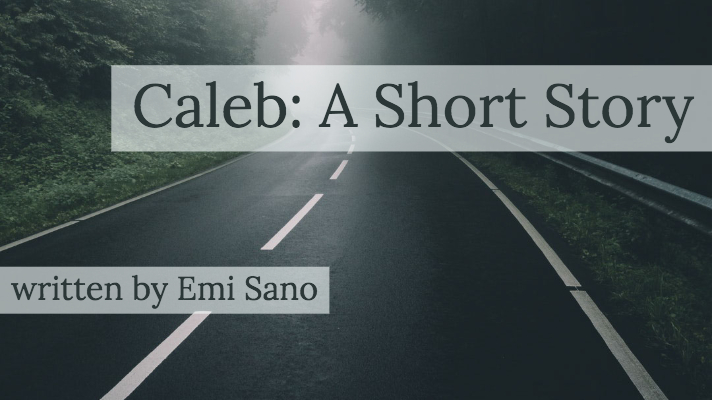 “He’s my son! That boy deserves to be in Hell!” Sam’s father exclaimed. Fortunately, his mother was more kind-spirited, despite the fact the accident killed her only child.

“We and John’s parents have already grieved enough about losing our boys… and Caleb’s mom has been with us since the accident. I would not be able to stand myself if I was the reason for her losing Caleb. Hank, it was an accident. Just accept it.”

Sam’s father didn’t want to have anything to do with me after that. I wasn’t allowed to be at the wake or funeral of my best friend. He couldn’t accept that his son died as a result of a nasty car wreck.

John’s parents didn’t react the same way. They took care of me at the hospital while my mom was at work. I was like their second child, and they were thrilled that at least I had survived. I think everyone knew that since my father died in Iraq my mom has been in a fragile state of mind. It was hard on the both of us, but I think she took it the worst. And my accident didn’t help, of course.

All this shouting took place in front of me, not literally, but I could still hear it. I was in my hospital bed still recovering from my five broken ribs, fractured arm, and road burns galore and his parents were standing outside door. Sam’s dad, Hank, took one look at me and saw red. I didn’t blame him. After all, his son was dead because of me.

The whole accident was a blur. I don’t remember much what happened during and after. All I remember was that we were laughing and something jumped out in front of me on the road and I swerved. The next thing I woke up in the hospital and in pain. I thought it was the worst pain I have ever felt… but then I found out that I killed my two best friends.

I cried for hours. I didn’t want to take any pain medication. I refused the morphine drip until my mom forcibly took the button away from my fingers and pushed it for me. I deserved to be in pain. I deserved to die, too.

That’s how I felt, anyway. But then I saw the look in my mom’s eyes as she watched me struggle between life and death. It was the same look that she gave me when she had to tell me my dad died on a mission in Iraq. I didn’t even know he was in Iraq. He never told me where he was going, only that he was just going to protect us. When she gave me that look, I knew that I had to toughen up and stay alive… not for me, but for her.

After I got out of the hospital, I wasn’t allowed to go back to school for another week. The doctors wanted me to go to physical therapy and give my burns a chance to heal. I was fine with the idea of staying at home. I worried what it would be like if I went back to school. I didn’t know if other people thought the same thing Sam’s father did, that I was a murderer.

My mom wouldn’t let me on social media the whole time I was recovering. She felt that some kids would be cruel and would push back my recovery process. I didn’t disagree, but it did kill me that I couldn’t check in on how everyone was doing. Besides, the only people I wanted to talk to anyway were dead.

I woke up every day in sweats. I think I was having nightmares about the accident, but I never remembered any of them. It was like my brain was trying to force me to remember what happened. I didn’t want to. I liked having it be black whenever I tried to remember. It was bad enough seeing that stupid raccoon in the middle of the road over and over again.

John’s parents would come by the house every now and then. They talked about his funeral arrangements… how it was separate from Sam’s. In the end Sam’s family decided to keep the funeral within the family and not let any of the friends come to pay their respects. I felt like they were being selfish, but I didn’t express my thoughts. Maybe I was being selfish for wanting to say goodbye to the friend that I killed.

John’s mass and wake was going to be open to the public. His parents reassured me that I was allowed to attend and they’ll do their best to make sure no one comes after me while I was there. They wanted me to be a part of their family, to stand by the casket when he was being lowered, but I told them that it didn’t feel right. I thanked them for inviting me and I promised that I would come.

The funeral mass was hard. I felt like the mass was directed towards me. The whole time the priest was talking about redemption and how God will bring judgment in the end. He kept mentioning that all his sins would be forgiven. I cried at that part. I wondered if it were true. Would I be forgiven? Would God accept me in His home even though I killed my best friends?

Everyone at the wake avoided me. I figured this would happen. My mom was too busy talking with John’s parents, trying to take her mind off things and also making sure they were okay. It was tough for my mom to be at the funeral, so soon after my dad died. I thought she never wanted to attend another funeral again. I was surprised that she was okay with coming along to John’s. But then again, we were all so close… it was like he was a part of her family as well.

Sam’s mother showed up to the wake. It was weird and awkward when she came up to me. She took me into her arms and held me tight. I wanted to squirm away, but I let her hold me as long as she needed. I guess she never really got the opportunity to express her gratitude that I survived.

“How are you holding up?” She asked as she finally let go of me.

“I’m hanging in there. Surviving… for them.”

“I’m sure Sam would appreciate that. He always said you were going to go far in life.” She chuckled. A wave of sadness came across her face before returning back to normal.

I nodded. She was always the tough mom out of all our moms. Sam was also like her. He knew he wasn’t smart enough, but he was always the one to back us up. He was our personal cheerleader and always made sure that we felt better about ourselves.

I stood above the casket. It was closed. John was too mangled, they said. I wondered if he felt any pain. I cried so many times that day. No one else came to the casket while I stood there.

“I’m so sorry, bud. I’m so sorry.” I said over and over again. My tears flooded down my cheeks. I was practically on top of the casket when John’s mother walked up and pulled me away.

The longer I stayed at the wake, the more I wanted to just crawl into a hole and never come out. My worst fears about school were coming true. I had glares sent in my direction from some of my classmates. Others were looking at me in pity. No one would talk to me, though. Not one person came up to say hi. I wondered if I needed to change schools.

My mom came to my rescue as she pulled me out of the funeral hall. She reminded me that the burial was going to be a private viewing. She felt we were there long enough. I got to say my goodbye, so I really was glad to get out of there.

It was hard not being able see John’s face. I wanted to really look at him and tell him face to face how sorry I was. I don’t know if that would have made me feel any better. I never got any type of closure with Sam.

When the doctors finally cleared me to go to school, my road burns were healed and but the scars remained. I looked like I was a monster.

It was like being at the wake all over again. Everyone was just staring as I walked past. Some were too pissed to talk, some too scared. Either way, it was maddening. I felt like screaming at everyone.

“JUST SAY SOMETHING.” I wanted to shout. I wanted them to break the silence. It was deafening. Even the teachers didn’t know what to say. They all avoided me like I had cancer. Actually, I would be treated better if I had cancer. I didn’t care if they said something mean to me, either. I just wanted someone to say anything just so I didn’t feel like the center of a freak show.

Stay tuned for the full version coming out in the next few months. I have an feeling you’ll like the ending for this one! Subscribe to the Exclusive Access Tier to be notified and gain access to the full version.