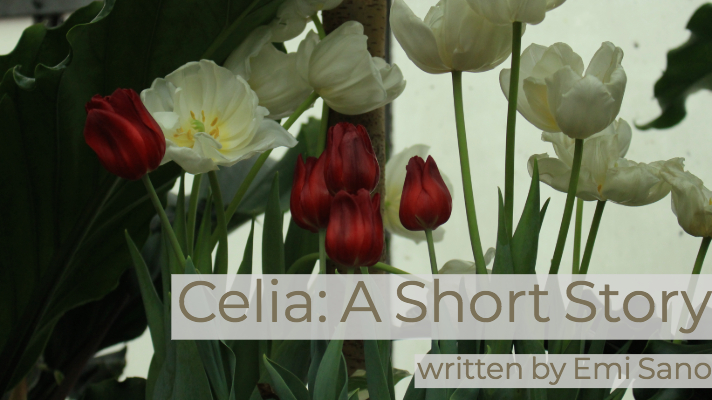 Inside a small cottage home lived an old woman named Celia who spent most of her days tending to her garden. Like most days, her routine was simple. In the morning, Celia would drink her coffee with a slice of buttered toast. After her breakfast, she would head outside while it was still cool to check her garden. The rest of the day consists of busying herself in front of the television and knitting her grandchildren and great grandchildren sweaters.

Celia’s been alone for six years now, since her husband unexpectedly fell ill. Her children begged her to sell the cottage and move in with one of them. She refused, feeling confident in being able to take care of herself. Her oldest child would stop by every week with her two grandkids.

“I’d like it better if you stayed with us, Mom. I worry about you out here.” Hannah would say every time.

“As long as my flowers need me, I’m staying.” She would insist. Unfortunately for Celia, Hannah was as stubborn as she. Hannah’s relentless begging weighted heavily on her. She didn’t want to cause worry on her children, but she also didn’t want to be a burden on their household.

When her husband fell ill, it was chaos. All three children came and stayed at the house, each taking turns on caring for him. She hated seeing him so helpless and didn’t want her children’s last days with him to be like that. Since then, Celia vowed that her kids would only see her best self. She would move herself into hospice should she need it.

Celia confided in her youngest, Maxwell, about it. He wasn’t happy about her going into hospice, and of course told his older sisters. Hannah and Gabby came over at once to take her out of that mindset. She lied to them and said she would let them take care of her when the time came.

One day, while working on her garden, she felt a pain in her chest. I’m old, she thought to herself, it’s nothing to be alarmed about. But later on, she was having trouble breathing. When this happened, she knew it was a heart attack. Maxwell was the closest to her, so she gave him a call. He immediately picked her up and took her to the ER. The doctor said she was lucky they caught it early enough. Maxwell said they were lucky he was working from home that day.

After she was discharged from the hospital she was brought to her second daughter, Gabby’s home. She was the only one who could stay home with Celia every day.

But, Celia just wanted to go to her home. Her flowers haven’t been tended to in a couple days and she worried the wildlife had taken notice. Of course, as much as she asked to go home, the longer she had to stay. Gabby promised they’d get someone to water her garden.

But what Gabby didn’t understand was that Celia’s garden was like her children. She wanted to be the one to nurture and take care of them… not a stranger. By the end of the week of being at Gabby’s, she insisted that she be taken to her home at once.

Gabby caved in and took her mother to the cottage.

There was a young man already watering the garden when they arrived. Celia felt a fire burn inside her chest as the car rolled to a stop.

“You hired someone to take care of my garden?” Celia asked Gabby, trying not to sound too angry.

“I didn’t want to, but Hannah insisted. She already had someone lined up. I’m sorry.” Gabby sighed as she turned off the car.

Celia didn’t respond, she got out of the car as fast as her body could let her and she hurried her legs over to where the man was finishing up the watering.

“Did you make sure to pull out the weeds before you watered?”

“And checked them for damages from bugs and other wildlife?”

“Yes ma’am. And trimmed some areas where it started to die.” The gardener put down the house and took off his gardening gloves. He extended out his hand for Celia to take. “I’m James. I work with your daughter’s landscaper from time to time.”

“Well, thank you for taking care of my garden while I was gone. I’m sure you have other gardens to work on. I can handle it from now on.” Celia gripped James’ hand as tight as she could for a quick shake before releasing.

“Mom!” Gabby was ashamed of her mother’s rudeness. “He’s just helping out until you’re better. The doctor said you needed two weeks!”

“I’m fine, Gabby. Just let me move back home. This is my garden. I will not have someone else touch it as long as I’m alive. You hear me?” Celia was facing Gabby now with so much fierceness that you’d wouldn’t have known she had a heart attack a week ago.

“If you don’t mind, ma’am, I could just come by and help with the lifting of equipment and you can do all the work. Just to keep your daughters’ minds at ease. Does that sound fair?” James proposed.

Gabby answered for Celia and agreed to those terms. She wouldn’t let Celia get another word into the conversation and thanked James as he left.

Celia was fuming. She wasn’t a child and she didn’t need to be watched over like one either. So, she had a heart attack. It was minor. She didn’t need to have surgery. All she had to do was watch her blood pressure. To Celia, she was as fit as a horse.

After a few choice words, Gabby left her mother alone at the house. Celia was proud of herself. She still held the mom power and she wasn’t going to let it go easily.

Celia had forgotten that James was supposed to come by to help and when he showed up, she was caught off guard. She almost clonked him with her watering can.

“Ma’am, I hope I’m not too late.” James said, looking a bit embarrassed about the whole situation.

“No, you’re right on time. If you want to help me, you’d grab that garden hose over there and get it unstuck. I couldn’t move it so I’m stuck using this watering can today.” Celia put James to work. The hose wasn’t really stuck by accident. Celia actually made it that way on purpose after James and Gabby had left the cottage. If James were going to come by every day to “help” she’d rather make him feel useful by “fixing” things.

Celia continued with her gardening shift by tending to her perennials. They were close to blooming and she couldn’t wait. They only stuck around for a short period of time, but seeing them bloom was the highlight of her year. She was worried that she was going to miss it if she stayed with Gabby any longer.

Each year she’d cut a couple before they die and let them live in her house for a few more days in the ceramic vase her husband bought her for Christmas. She chose different ones each year, but her favorite was the tulips. Celia loved how the colors looked in her kitchen from the tulips. They brought the kitchen to life.

James finished fixing the hose area by the time Celia was done with her gardening. She motioned for him to come inside while she made some iced tea. James was appreciative about the tea, but he was very ashamed that he didn’t do much gardening work with Celia. She told him that it was quite all right and she was just glad that tomorrow she didn’t have to use the watering can.

For the rest of the week, Celia had a to-do list for James to “fix” while she worked on different parts of her garden. She hoped that he wouldn’t catch on to her antics, but if he had, he never let on that he knew.

A/N: Thanks for tuning into my newest short story excerpt! I hope you liked what you read so far. I loved working on this piece… Celia is my spirit animal.

If you want to continue reading this story subscribe to my Exclusive Access Tier on Patreon to get access to all my full stories posted on this blog! This one will be posted in a few months. So don’t delay!